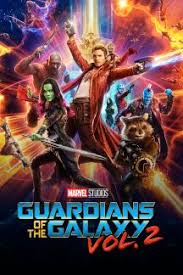 Initially I was purposely refraining from reviewing any Marvel/comic book films. Reason being is that they all are really awesome cool effects and amazing plot lines. The MCU has been very groundbreaking from all the tie ins from television to movies and consistently produce a lot of high quality material. The films can be redundant and when writing reviews it is hard to explain something readers don’t already know. Also I was never a big comic book reader. Although I enjoy the films I didn’t want to review them without a good representation from the comics, ( there is nothing more devastating and embarrassing  then seeing a marvel movie with comic book fanatics and feeling left out because you don’t know what the hell they are talking about…sigh) but I got the opportunity to see the latest Marvel effort Guardians of the Galaxy vol. 2 and was psyched to see it defend the reputation.

The Guardians of the Galaxy consisting of Peter Quill, Gamora, Drax the Destroyer, Rocket and Groot are hired by a legendary unit known as The Sovereign to protect important batteries in exchange for Gamora’s half-sister Nebula. Rocket ends up stealing the batteries the team is ordered to protect leading the Sovereign on a chase around the galaxy to retrieve the items. The Guardians end up having their ship crashed on a planet during an escape where Rocket and Groot are eventually captured and the rest of the gang is encountered by Quill’s biological father Ego. Ego invites the Guardians to his home planet when all seems fine until an evil master plan unfolded by Ego to take over the world that involves Quill accessing something known as the celestial power. Even though Quill is excited to finally know his Father he is forced with the decision of turning his back on the Guardians and helping his dad take over the universe.

“When you are ugly and someone tells you they love you, you know they love you for who you are. Beautiful people don’t know who to trust.”

“I know what kind of boy you are, because you are me”

“You shouldn’t have killed my mom and squished my walkman”

Chris Pratt (Peter Quill) – Now an established leading man in Hollywood, Pratt was really good here. Even though he has the fun-loving spirit he also was able to switch it up and get very serious when he needed to.

Zoe Saldana (Gamora) – The go to lady for space films Saldana has built up quite the resume with her work in roles like this. She definitely adds a presence as in her prime she is untouchable.

Dave Baustista (Drax the Destroyer) he has come a long way as an actor and it is great to see him do well as I was a fan of his since WWE. Brings a lot of comedy to the film.

Bradley Cooper (Rocket)- He is great in any role he gets to be very sarcastic and can be an asshole with no filter and his performance here was no different.

An exciting climax as Rocket turns the stolen batteries into a ticking time bomb to blow up Egos planet. The Guardians make an attempt to flee while Quill and Ego are left behind to battle for control of the celestial power and the fate of the universe.

I enjoyed this film quite more than I initially thought I would. I mean sooner or later they do actually guard the galaxy…. but I also felt this film told excellent stories. Quill always wanted to know his biological father and the history of his origins but by the end he was able appreciate Yondu for being the father figure he always was to him. Also the rivalry between Gamora and Nebula coming to a close as both had the opportunity to end the other but they couldn’t do it and eventually reconciled. It is the basic searching for something you had all along and finally being grateful for it theme but it was affective. Of course as with every Marvel film there are riveting action sequences and stunning visual effects. Stylistically I think Guardians is the best marvel film even by their standards. The costume and set design were just beautiful. There was so much dedication and originality of each individual planet and character. I think movie goers will appreciate all the eye-catching efforts. Guardians of the Galaxy finds a way to be unique and continues the momentum for the Mega Marvel cinematic universe.

This is a text widget, which allows you to add text or HTML to your sidebar. You can use them to display text, links, images, HTML, or a combination of these. Edit them in the Widget section of the Customizer.
Join 825 other subscribers
Advertisements
Loading Comments...
%d bloggers like this: